You are here: Sydney A to Z (home) » Baha'i Temple 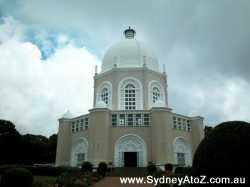 ©2006 Gabriel Ditu
The Baha'i House of Worship, also known as Baha'i Temple, has nine sides and nine entrances symbolizing the unity of the human race under the one God. The Sydney Baha'i Temple it is one of the only seven houses of worship in the world dedicated to Baha'i Faith. The others are build in Uganda, Germany, Panama, Western Samoa, the United States and India.

©2006 Gabriel Ditu
Baha'is Faith is based on Baha'u'llah (1817-1892) teachings, which is the founder of this religion. He is regarded by Baha'is as the most recent in a line of messengers of God that includes Abraham, Moses, Buddha, Krishna, Zoroaster, Jesus and Muhammad. The following quote will probably summarize best the Baha'is teachings:

The construction of the temple started in April 1957. 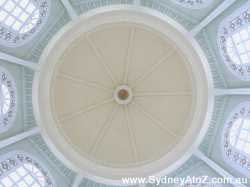 On the center of the dome's ceiling, was written an inscription in Arabic, reading "To the Glory of the All Glorious". See the adjacent picture.

Hours of Operation:
Open to the public from 9 AM to 5 PM, every day of the year.