You are here: Sydney A to Z (home) » light rail 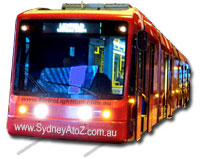 Due to modern transport and the opening of new terminals (Port Botany, Chullora) the volume of Darling Harbour traffic decreased continuously in time and was brought to a halt at 26 of October 1984.

Until 22 of January 1996, the line continued to run intermittent goods traffic, including a weekly wheat train to the Edwin Davey Flour Mill.

In 1994 the Sydney Light Rail Company was formed and the Darling Harbour Goods Line conversion of the first section of line from Central station to Pyrmont started on 25 January 1996.

The line opened for trial service on the 11 August 199 and was officialy by the then Premier of New South Wales Bob Carr on 31 August.

On Sunday 13 August 2000 the Lilyfield extension was officially opened.

Frequency:
Between Central and Star City Casino
24 hrs per day every day
Every 10-15 minutes 6AM to Midnight
Every 30 minutes Midnight to 6AM

Between Central and Lilyfield
Everyday every 10-15 minutes
Sun - Thu: 6AM to 11PM
Fri & Sat: 6AM to midnight