You are here: Sydney A to Z (home) » Deep Space Communication Complex 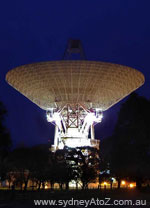 ©2006 Gabriel Ditu
The complex is part of the Deep Space Network run by NASA's Jet Propulsion Laboratory (JPL) and was officially opened on 19 March 1965 by Sir Robert Menzies.

There are only three DSCC in the world. The other two are the Madrid DSCC located in Spain and the Goldstone DSCC in the US.

The CSIRO manages most of NASA's activities in Australia. Since March 2003, Raytheon Australia has managed the CDSCC on behalf of the CSIRO and NASA.

©2006 Gabriel Ditu
The Orroral Valley Tracking Station was opened in May 1965 in what is now part of Namadgi National Park. Its role was orbiting satellite support, although it also supported the Apollo-Soyuz Test Project in 1975. It was closed in 1985.

Honeysuckle Creek Tracking Station opened in 1967 and was built primarily to support the Apollo moon missions, mainly communications with the Apollo Command Module. After the cancellation of the Apollo Project the station supported Skylab until its re-entry in 1979 when the station joined the Deep Space Network in support of the Viking and Voyager projects. 1981 saw the closure of the station and its 26 m antenna was moved to CDSCC to become known as Deep Space Station 46.

How to get there
By car via the highway that is linking Sydney and Canberra. See map.