You are here: Sydney A to Z (home) » remembrance day 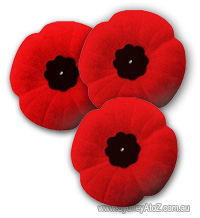 ©2006 Gabriel Ditu
At 11 am on 11 November 1918 The First World War came to an end after more than four years continuous warfare.

To commemorate all those who lost their lives during the Great War, each year on 11 of November across the world are organized commemorative ceremonies. For this reason 11 of November has become known as the Remembrance Day. Part of ceremony is a one minute's silence at 11 am.

In Australia, on 11 November 1993 at 11 am, the remains of an unknown Australian soldier from World War I were entombed with military honors in the Australian War Memorial in Canberra.

Governor-General, Sir William Deane, in November 1997, has formally declared 11 November as Remembrance Day, urging all Australians to observe one minute's silence at 11 am on 11 November.

Trivia: In many instances Remembrance Day is using the poppy as a symbol. This is a result of Canadian military physician John McCrae's poem In Flanders Fields. The poppy emblem was chosen because of the poppies that bloomed across some of the worst battlefields of Flanders in World War I, their red colour an appropriate symbol for the bloodshed of trench warfare.

In Sydney Remembrance Day celebration takes place at The Cenotaph in Martin Place.


Note: This is not a public holiday.

1812 - Two Wesleyan Methodist classes were established in Sydney by Thomas Bowden and John Hosking - the beginning of Methodism in Australia.