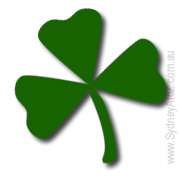 ©2006 Gabriel Ditu
Traditionally St. Patrick's colour is blue, not green. Green, the colour associated with Ireland, Irish people and with St. Patrick's Day, become popular from the phrase "wearing of the green" meaning to wear a shamrock (clover leaf) on one's clothing. This tradition has its origin in the fact that St Patrick used the shamrock, a three-leaved plant, to explain the Holy Trinity. The wearing of shamrocks or shamrock-inspired designs have become a symbol of St Patrick's holiday.

St Patrick was born in England around 385AD, at that time part of the Roman Empire. His father was an army officer named Calpurnius.

When he was a teenager St Patrick was kidnapped and sold into slavery in Ireland. St Patrick managed to escape from slavery and traveled to France. He joined a monastery and latter on became a bishop and returns to Ireland to spread the word of God.

He is acknowledged to be the one that brought the catholic religion to Ireland.

For 20 years St Patrick traveled throughout Ireland, establishing monasteries across the country. He also set up schools and churches, which would aid him in his conversion. He developed a native clergy, fostered the growth of monasticism, established dioceses, and held church council.

details:
For more details regarding the parade and other festivities organized for St Patrick's Day please follow the link listed below: