The City to Surf race idea, came from a similar race that is taking place in San Francisco, called The San Francisco Bay to Breakers. First City to Surf competition was organized in 1971. In that year just a couple of thousand people have participated and from these, only two percent were women. Today the City to Surf is one of the biggest fun runs in the world with an equal participation between men and women. 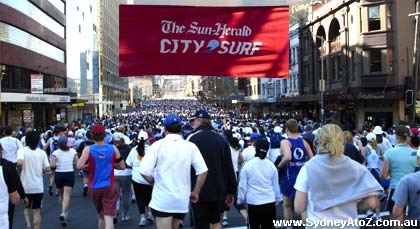 City to Surf competition usually starts at the corner of Park and College Streets (same as the Australian Museum), and go through the city, ending at Bondi Beach. The admission in the race must be made via mail before the race. City to Surf race is opened to anybody regardless of age or level of fitness. If you can not run you can walk. Important is to participate.

Entry forms can be found only in The Sun-Herald newspaper commencing from end of May until the race week. Alternatively you can do it online at the City to Surf race web page.

When:
Second Sunday in August.