You are here: Sydney A to Z (home) » Sydney Marathon

The Sydney Marathon was first held in 2001 and was organized as a celebration of the 2000 Sydney Olympics. 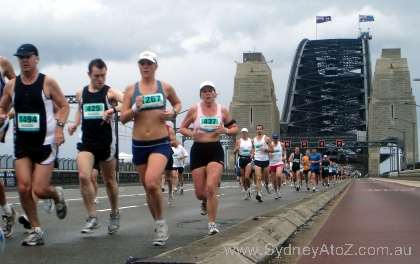 In 2005 Sydney Marathon was renamed, and is called now Sydney Running Festival. In the same year, a new run was introduced: The Family Fun Run (3.8km) which is aimed at the people without a high level of fitness.

Trivia: the history behind the Marathon race. In September 490 BC, on a plain close to Marathon, the Greeks won a decisive battle against the Persian army. According to the legend, an Athenian messenger was sent to Athens to announce the Persian defeat. After a 40km run announced the victory and then he died of exhaustion.

When: Second Sunday in September. Please check here.
Running distance: 42.195 km.
Starting time: Early morning (approx 7:00AM). Please check here.
Age groups: 18-29; 30-39; 40-49; 50-59; 60-69; 70+ (min 18).
Course Description: The Sydney Marathon course is made of gradual climbs (nothing dramatic) and flat sections. The first 5k are gentle gradual slopes over the bridge, Macquarie Street up to the Mrs Macquarie's Chair section. The next 15km are flat as the course goes through the eastern suburbs and Centennial Park and then back to the city. In the city the course follows Sussex Street, Hickson Road and climbs up to Townes and Dalgety Streets towards to the Observatory Hill. The final section goes to the Cahill Corkscrew towards to the and on to the forecourt of the Opera House which marks the finish line.