You are here: Sydney A to Z (home) » Sydney New Year Fireworks

Each year the Sydney Municipality spends millions of dollars for the New Year and Christmas celebration. 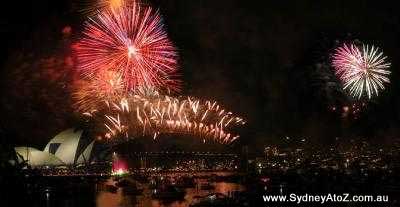 ©2006 Gabriel Ditu
Most of the moneys are spent on a spectacular firework which takes place around the Opera House and Harbor Bridge. In the last years the New Year Fireworks show is divided in two. The first show starts around 9PM and the second show which is also the most spectacular starts at 00:00 when the New Year is "born". 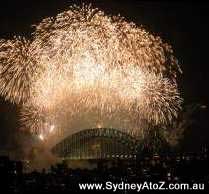 ©2006 Gabriel Ditu
A few tips regarding the fireworks. Being very close to Opera House and Harbor Bridge is not very good because all the show happens above your head. You should be at least as far as Mrs Macquarie's Chair. To give you an idea, Channel NINE's TV crew is filming from Fort Denison. Do not try to go by car would be impossible to find a parking spot and also next to impossible to drive home from the City. While the public transport in Sydney is not the best, in this instance you will find it more convenient. I recommend you to use the trains instead of buses.

How to get there:
By public transport, trains and buses, to the City Circle.

which is the official site of the City of Sydney. Usually there will be a posting a map with the best vantage points. Take your pick, but read first the above recommendations.