You are here: Sydney A to Z (home) » barrenjoey lighthouse 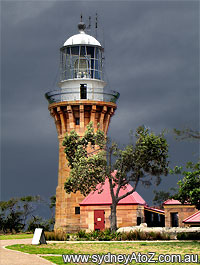 ©2006 Gabriel Ditu
Not long after the Sydney colony was started, people use the Hawkesbury River area as a source of wood for the young developing colony. At the same time, Broken Bay was used more and more as a refuge for the ships carrying goods between Newcastle and Sydney. As a result two wooden lighthouses called the Stewart Towers were built in 1868.

As the traffic was increasing steadily a new lighthouse was built, having James Barnet as architect and in 1881 the current Barrenjoey Lighthouse was entering in service. While the lighthouse remained unchanged on the outside, the optical equipment evolved from oil wicks to acetylene gas and in 1972 was electrified.

©2006 Gabriel Ditu
Lighthouse character is four white flashes, separated by 2 seconds, every 20 seconds. The Barrenjoey lighthouse has a 113 metres elevation and can be seen from 35 km.

The lighthouse can be visited and has also a small museum associated that illustrates the history and the evolution of the lighthouse.

Trivia: Barrenjoey in is the Aboriginal name for a young kangaroo.

How to get there
By bus from Wynyard Station. If you go directly to Palm Beach take an Express service. It's much faster. See map.

For information on guided tours in the lighthouse, ring Cadmans Cottage on 02 9247 5033.