You are here: Sydney A to Z (home) » hornby lighthouse 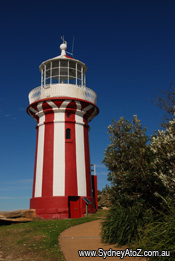 ©2006 Gabriel Ditu
The August 1857 shipwreck of Dunbar and the October 1857 wreck of Catherine Adamson prompted the need of a lighthouse to mark the entrance to Jackson's Bay.

The lighthouse was erected in 1858 and was opened by Sir William Denison, the Governor of New South Wales who named it after his father-in-law, Admiral Sir Phipps Hornby.

The Hornby lighthouse was also known as the Lower Light in comparison with the nearby Macquarie Light.

Trivia: The first light keeper of the Hornby lighthouse, Henry Johnson, was a direct descendent of the sole surviver of the Dunbar shipwreck.

How to get there
By bus from Circular Quay. Another alternative will be to catch a ferry to Watsons Bay and walk about 1Km to the lighthouse. See map.