You are here: Sydney A to Z (home) » nobbys head lighthouse 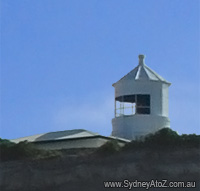 ©2006 Gabriel Ditu
On 10 May 1770, Captain James Cook was the first European to sight Nobbys Head from the ship Endeavour. He describes it as"

"A small round rock or Island, laying close under the land, bore South 82 degrees West, distance 3 or 4 Leagues"

Designed by Alexander Dawson, Nobbys Head lighthouse entered in service in 1 January 1858 and was automated in 1935.

Trivia: Nobbys Head is the third lighthouse built in New South Wales after the Macquarie Lighthouse and the Hornby Lighthouse.