You are here: Sydney A to Z (home) » Cadman's Cottage 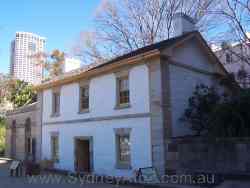 Photo © Ioan Ditu
John Cadman was arrested in December 1796 for stealing a horse. He was tried and sentenced to death. Later, his death sentence was changed to deportation to Australia.

In 1809 he was employed in Sydney's Dockyard. Five years later, he received his pardon. In 1827 he become coxswain and moved in Cadman's Cottage where he lived 19 years together with his wife, Elizabeth Mortimer, which was a convict as well. 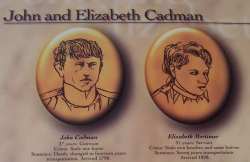 Cadman's Cottage Museum - display
Photo © Ioan Ditu
In 1846, Cadman's Cottage is used by the Water Police and is used as a detention place as well. In 1926, the cottage was renovated and used as accommodation for officers of the visiting ships.

In 1972 the Cadman's Cottage is declared historic site and its administration is given to the NSW National Parks and Wildlife Service.