François de Galup, Compte de La Pérouse, was a French Explorer, born at Gô near d'Albi, on 22 August 1741. La Pérouse was the name of a family property which he added to his name.

©2006 Gabriel Ditu
He studied in a Jesuit college, and entered the naval college in Brest when he was fifteen, and fought the British off North America in the Seven Years' War. He was promoted to rank of commodore when he defeated English frigate Ariel in the West Indies. In August 1782 he made fame by capturing two English forts on the coast of the Hudson Bay. 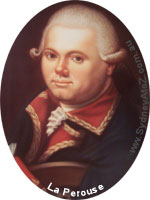 Photo © Ioan Ditu
He was appointed in 1785 to lead an expedition to the Pacific. His ships were the Astrolabe and the Boussole, both 500 tons. Among his 114 man crew there were ten scientists: an astronomer, a physicist, three naturalists, a mathematician, three draftsmen, and even both chaplains were scientifically schooled.

He arrives at Botany Bay Australia on 26 January 1788, just as Captain Arthur Phillip moved the colony from Botany Bay to Port Jackson. The British received him courteously, but were unable to help him with food. La Pérouse sent his journals and letters to Europe with a British ship and then left for New Caledonia and Santa Cruz islands. That was the last record of him or his expedition.

In 1826 the English captain, Peter Dillon, found evidence of the tragedy near Vanikoro where the two French ships sank between the coral reefs.

La Pérouse Museum, looks at the expedition of Count La Pérouse through the Pacific between 1787-1788. The collection contains objects from La Pérouse wrecks and generic navigational and maritime history. The Museum also has a growing local history collection.

The collection contains hundreds of objects, prints and photographs.

Hours of Operation:
Wednesday - Sunday 10:00am-4;00pm.
For admission you need to pay a small fee.

26 February
1942 - A floatplane from Japanese submarine I-25 makes a reconnaissance flight over Melbourne and Port Phillip Bay.