You are here: Sydney A to Z (home) » Katoomba 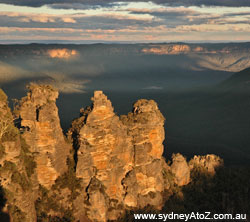 In summer temperatures are ranging between 30 °C and over 13 °C. In winter the temperature is typically about 12-13 °C in the daytime with -3 °C or so on clear nights and 2 to 3 °C on cloudy nights.

Katoomba was previously known as William's Chimney and Collett's Swamp. In 1874 the was named The Crushers after the name of the railway station that served a nearby quarry. The name Katoomba was adopted in 1877 and the town achieved municipality status in 1889.

First developed as tourist destination towards the end of the 19th century, when a series of grand hotels were built in the area. Mining was also carried out in the Jamison Valley for many years, but the seams were completely exhausted by the early 20th century and Katoomba was established as a resort town.

How to get there
Best is by train from Central Station in Sydney and go off the train at Katoomba Station. You can also catch the train from Stratfield or Parramatta Station. Check the City Rail timetables. See map.

Best viewed:
In spring when all the flowers are in bloom.