You are here: Sydney A to Z (home) » Mount Tomah Botanic Garden

The original owners of the land occupied by the Mount Tomah Botanic Garden, were the Darug Aboriginal people. 'Tomah' is an Aboriginal word meaning tree fern. 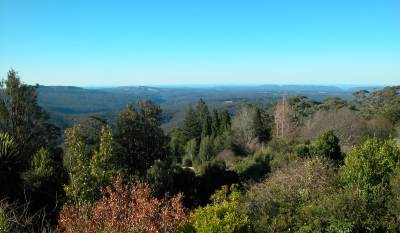 ©2006 Gabriel Ditu
The English colonists called the place Fern Tree Hill, but latter on the name was changed to Mount Tomah. 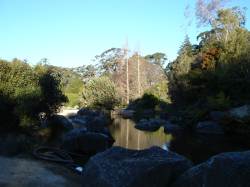 ©2006 Gabriel Ditu
After the discovery in 1823, by Archibald Bell of a route across Blue Mountains, afterwards known as Bells Line of Road, more people started to settle along this route.

From 1934 the property now occupied by the Garden was owned by the French-born horticulturist Alfred Brunet and his wife Effie. They were supplying flowers to Sydney florists. In 1972 the Brunet family donates their land at Mount Tomah for a botanic garden, which in the end will become an annex of the Sydney Royal Botanic Garden. With public funds the Mount Tomah Botanic Garden opens to the public on 1 November 1987.

Some of the features of the Mount Tomah Botanic Garden: 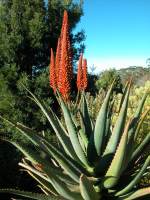 Mount Tomah Botanic Garden has a restaurant with spectaculars views, or if you are on budget, you can bring and have a picnic in the garden. There are picnic tables and chairs, free barbecues available.

While the entrance is not free the fee is symbolic and you would not regret the money spent.

How to get there
With your private car or a rented one. Drive from Sydney to Richmond and from there towards Lithgow on the Bells Line of Road. There are indicators on the road pointing towards the Mount Tomah Botanic Garden. See map.