The area close to Park Street was originally used as a place for public executions.

In 1810, the Governor Macquarie reserves this area plus up to 23 hectares of land, for public recreation and entertainment. The park was named Hyde Park after London's Hyde Park. A 2 km racecourse was build and a public meeting place. 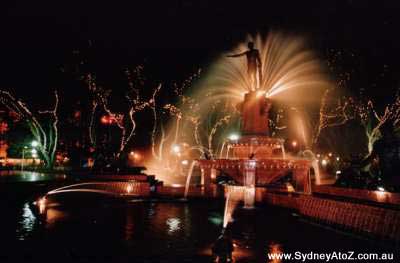 In 1926 the French artist François Sicard was hired to build a fountain in the north part of the park. The fountain is named after the J.F. Archibald, editor of the Bulletin magazine.


In 1934, Bruce Dellite designs in the art deco style, the ANZAC War Memorial dedicated to all Australians and New Zealanders who served in the WWI.

Today Hyde Park is the favorite spot for many people working in Sydney CBD for taking a lunch brake. Keep in mind, if you happen to be in Sydney during Sydney's Festival (January), that there are many events organized in Hyde Park.

How to get there
Both, St James and Museum railway stations have exits in Hyde Park. Many buses that are going in the CBD have stops around Hard Park. See map.

Hours of Operation:
It's open 24h a day, every day and the access is free. As it should be.

06 Octomber
1810 - A town plan of Sydney was published, on which the streets were given new and permanent names, including Market, George, Park and Barrack Streets.