You are here: Sydney A to Z (home) » The Dover Heights Memorial

During the WWII, Dover Heights was the location of a radar station run by the Australian Army. After the war, the Dover Heights site was developed as a radio astronomy research facility, were John Bolton, Bruce Slee, Gordon Stanley, Kevin Westfold and Dick McGee made many of the observations and pioneering work. 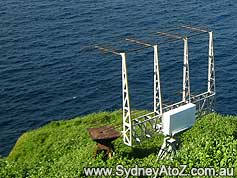 The lead scientists John Bolton, Gordon Stanley and Bruce Slee they created a new antenna which was a 22m dish shaped hole in the ground, covered with metal strips. Same concept will be used many years later for the Arrecibo radio telescope. At that time, was the second-largest radio telescope.

Using this radio telescope they mapped the radio sources of the sky, including the Sagittarius A source, which was adopted by the astronomical community as the location of the center of our Galaxy.

To celebrate their achievements, on 20 July 2003, the Australia Telescope National Facility, has opened a scientific memorial at Rodney Reserve on the original site. This memorial is a full size replica of the 8-element Yagi antenna used in 1951.

How to get there
Go by train to Bondi Junction and from there catch a bus to Blake Street Dover Heights. Bus no: 387, 389. For more details please check the trip planner.

Hours of Operation:
Rodney Reserve is a public place, which is open 24 hours 7 days a week. Free entrance.