You are here: Sydney A to Z (home) » hyde park obelisk 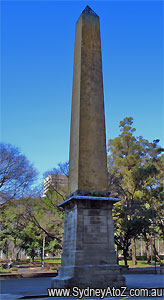 ©2006 Gabriel Ditu
Hyde Park Obelisk is an obelisk located in Hyde Park in Sydney, New South Wales, Australia. Unveiled in 1857 by the then Lord Mayor, George Thornton, was used at that time as a sewerage vent. The choice of the location was based on the fact that the sewage system was at its highest point at the corner of Elizabeth and Bathurst Streets.

The obelisk was modeled on Cleopatra's Needle on the banks of London's Thames River. The overall structure is 22 meters high, including a square sandstone base 6.5 meters high. The vent at the top is a filigreed bronze pyramid. It is also jokingly referred to as Thorton's Scent Bottle.

Today, due to the risk of contamination, the Hyde Park Obelisk is not used anymore as a vent.

How to get there
If you are close to any CityRail station you can catch a train to either St James, Museum or Town Hall and than walk. Alternatively, if you are in Sydney CBD you can walk. Beside the rail services, you can catch a bus. See map.

Contact details:
Address: Hyde Park at the corner of Elizabeth and Bathurst Streets.