You are here: Sydney A to Z (home) » mortuary station 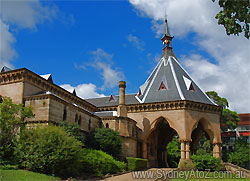 This station was built in conjunction with the Receiving House at Rookwood Cemetery. Both of the stations were designed by architect James Barnet using elements inspired from 13th century Gothic style. The sculptors, Thomas Ducket and Henry Apperly created the sculptures for both stations. These included angels, cherubs, and gargoyles.

It was restored by the State Rail Authority in 1981 and classified as a heritage building by the National Trust of Australia and the Australian Heritage Commission. It was reopened on the 21st of April 1985 by Neville Wran. Currently the station is used to launch special train services and public displays of trains. 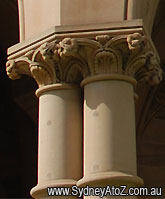 ©2006 Gabriel Ditu
How to get there
If you are close to any CityRail station you can catch a train to Central Station. Alternatively, if you are in Sydney CBD you can walk. Beside the rail services, the Central Station is also hub for the bus services. As a result you also have a wide choice of bus lines. See map.

Hours of Operation:
Unless there is a public event, the station is closed but can be viewed and photographed from outside.