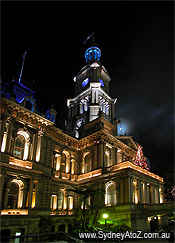 ©2006 Gabriel Ditu
Sydney Town Hall was built in the 1880s from sandstone in Victorian architectural style and houses the Sydney City Council Chamber and offices for the Lord Mayor and elected councilors.

Lately was discovered that Sydney Town Hall lies on top of an ancient burial complex.

Trivia: The Centennial Hall contains the world's largest entirely mechanical pipe organ which possesses one of only two full-length 64 organ stops in the world.

Note: Sydney Town Hall is not open to the public during private function hours.