You are here: Sydney A to Z (home) » central station 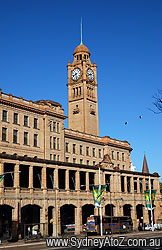 ©2006 Gabriel Ditu
On the 26 September 1855 the first Sydney Station, named Redfern was opened on an area called "Cleveland Fields". This station was made of one wooden platform covered with a corrugated iron roof.

A new station was built in 1874 on the same site and also known as Redfern. This station was made of a brick building with two platforms. Later on, up to 14 platforms were added, until a decision was taken to build a new station, closer to the City. The new station was built on a site previously occupied by the Devonshire Street Cemetery, a convent, a female refuge, a police barracks, a parsonage and a Benevolent Society. To transfer the remains from the cemetery a Mortuary Station was built which was used until 1906.

Sydney station has expanded since 1906 and a 75-metre Gothic revival clock tower was added at the north-western corner of the station on 3 March 1921.

Central Station celebrated its 100 years of service anniversary on 5 August 2006.

Today, the Central Railway Station (also known as Sydney Terminal) is the largest railway station in Sydney and it acts as a hub for both the CityRail network and the InterCity rail services.

How to get there
If you are close to any CityRail station you can catch a train to Central Station. Alternatively, if you are in Sydney CBD you can walk. Beside the rail services, the Central Station is also hub for the bus services. As a result you also have a wide choice of bus lines. See map. 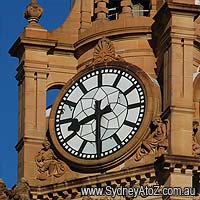 Other useful links:
Trip Planner. Enter your departure and destination point together with the time you expect to do your trip and the Trip Planner gives you all the details you need to reach your destination.

Hours of Operation:
Approximative between 4AM to midnight. Please check the CityRail web site or the printed time tables.