You are here: Sydney A to Z (home) » IMAX Theatre

The IMAX images are taken with a special camera that allows the projection of an image ten times larger than the normal cinema format, equivalent of an eight stores high screen. 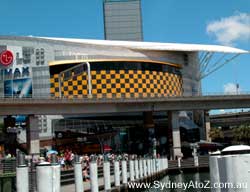 ©2006 Gabriel Ditu
The IMAX uses a custom made, six channel sound track, which is played through a 15,000 W digital surround system.

IMAX films are shot and projected on a 70mm film with very high resolution. During projection, each frame is held against lens of the projector by vacuum. As a consequence, focus achieved is far above normal standards and the image clarity it is at maximum.

Some movies are filmed and projected on the screen stereoscopic, creating a true 3D optical effect. Based on human vision, the system tries to simulate the way the eyes and the brain are putting the images together.

Both, the camera and the projector have two lenses set apart roughly matching the distance between the eyes. The "film" has two rolls, one for each eye and are alternately projected on the screen alternating between left and right images 96 times per second.

The viewer's headset is equipped with infra red sensors which are switching off left or right lens of the headset. In this way the viewer sees the screen with only one eye at the time, according with the image projected, creating a 3D illusion. The headset is synchronized via an infrared beam sent by the projector.

How to get there
Best by train or bus from Town Hall station and then walk towards Darling Harbour, where is located. See map.

Hours of Operation:
For information about what's on and the hours of each presentation see the IMAX Australia web site.