You are here: Sydney A to Z (home) » Sir Charles Kingsford Smith

Charles Kingsford Smith was born in Hamilton in Brisbane. At 18, he enrolled as a soldier in the World War I and later became a pilot. He was awarded the Military Cross for bravery. 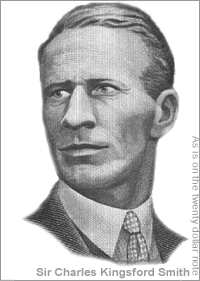 He established numerous record flights, around Australia, across the Pacific, to England and around the world. Kingsford Smith set up the first Australian airline.

On 6 November 1935, Charles Kingsford Smith and his co-pilot Tommy Pethybridge took off on a planned flight from England to Australia in the Lady Southern Cross, a Lockheed Altair. At dusk on 7 November 1935 Smith and his co-pilot Tommy Pethybridge, departed from Allahabad, India heading towards Singapore. They were last seen just before 3:00AM on 8th of November by another Australian pilot, Jimmy Melrose, who was heading south from Rangoon in a much slower plane.

Trivia: His name was Charles Smith, Kingsford was added to his name after the Pacific crossing.

©2006 Gabriel Ditu
He is remembered as one of Australia's flight pioneers. He was made Sir Charles by King George VI, Sydney Airport is referred as Kingsford Smith Airport, the 20$ bank note has his portrait on one side, a street in Brisbane is named after him, stamps were printed and so on.

One of Sir Charles Kingsford Smith planes, the Southern Cross (pictured on the above stamp), is on display at Brisbane Airport.