You are here: Sydney A to Z (home) » Sydney AMP Tower

People refer to it as AMP Tower (after its owners), Centerpoint Tower or Sydney Tower. The official name is Sydney Tower.

The turret has a capacity of 960 people, contains two levels of restaurants, an Observation Deck with a coffee lounge, two telecommunication levels and three utility levels. The turret of Sydney Tower is equivalent in size to that of a nine-storey building and the stability of the tower is ensured by 56 steel cables. It's ranked as one of the most secure buildings in the world. 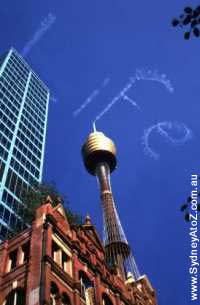 Sydney Tower is equiped with three high speed double deck lifts which can transport 60 people from the top to bottom in approximately 40 seconds. In case of an emergency there are fire stairs numbering some 1504 steps. Let's hope it is not going to be needed!

Trivia: Sydney Tower's turet has over 400 windows that can be cleaned by a semi-automatic window-cleaning machine in two days.