You are here: Sydney A to Z (home) » The Strand Arcade 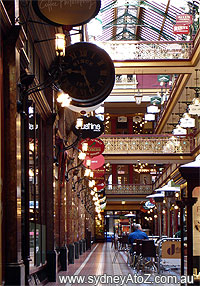 ©2006 Gabriel Ditu
'The Strand' arcade opened in 1892 and it was the last arcade built in Victorian style in Sydney. Today it is the only one remaining in its original form.

In the beginning the Arcade was called the City Arcade or Arcade Street. In 1981 it was renamed The Strand, after the London Street that links the city of London and the city of Westminster.

In Sydney, The Strand is a passage between George Street and Pitt Street shopping mall. 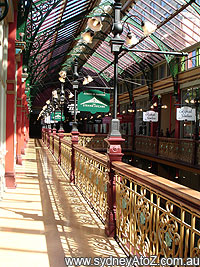 ©2006 Gabriel Ditu
The Strand, developed in an elegant shopping mall known for its style, tradition and fashionable shopping. Today is one of Sydney's landmarks and is home to some of the most fashionable stores.

The Strand is housing many of Australias top designer labels,such as Alannah Hill, The Corner Shop, Alex Perry, Jayson Brunsdon, Victoria Buckley Jewellery, Terry Biviano. Also here there are a few shops where you can buy quality souvenirs such as Akubra hats and opals.

Even if you find the place too expesive for you, The Strand is still a place you would like to see.

How to get there
It is located close to Queen Victoria Building. The closest train station is Town Hall. See map.

Hours of Operation:
Many shops different trading hours. Most of them are open 9AM to 5AM - 6PM.