You are here: Sydney A to Z (home) » Sydney Observatory 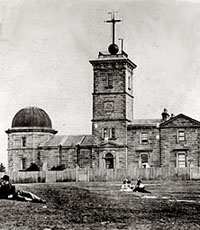 Sydney Observatory was build to fill in the need for a time keeping authority. Every day at 13.00 (1:00 PM), the ball on top of the tower would drop signaling the correct time to the ships in the harbour. Accurate time was needed for navigation, helping to determine the latitude. Fort Denison was relaying the time information to the City of Sydney by firing one of its cannons. 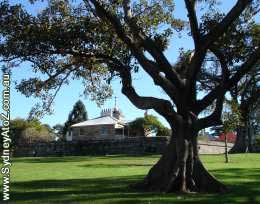 ©2006 Gabriel Ditu
Henry Chamberlain Russell in 1880's started to create a catalog of the sky. To understand the complexity of the task, it's sufficient to say that it took 80 years and required 53 volumes.

As optical astronomy require pristine air and a dark sky, with Sydney becoming a huge light and air polluter, in 1982, Sydney Observatory was transformed in a museum of astronomy and related disciplines.

Trivia: Sydney Observatory is build on the same site as the first flour mill from Sydney. For this reason the name 'Millers Point' was given to the area where grain was unloaded.

How to get there
Sydney Observatory is easily accessed from Circular Quay train station via a walk through The Rocks (15-20 min walk). Buses and ferries are stopping at Circular Quay too. There is no parking available. See map.

06 Octomber
1810 - A town plan of Sydney was published, on which the streets were given new and permanent names, including Market, George, Park and Barrack Streets.