You are here: Sydney A to Z (home) » Australian Reptile Park

The Reptile Park has been founded in 1958 by Eric Worrell who used to run a center for collecting venom from poisonous spiders and snakes in order to create the anti-venom (antidote) for poisonous snakes and spiders bites. 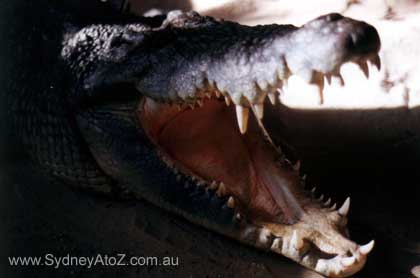 The Reptile Park flourishes under the direction of Peter Krauss who builds the first display to house nocturnal animals from Australia and overseas, the park attracting record crowds each year.

In the 1980's, the number of visitors is in a continue decline and the new owners, John and Robyn Weigel, took measures to revive the Reptile Park: a large crocodile is brought from Northern Territory, school programs are developed, and finally to move the park to a new location at Somersby, near Gosford.

The new Reptile Park is opened at 7 September 1996 and wins numerous tourist awards. Unfortunately, in 2000, due to an electrical fault, the main building of the Reptile Park, burns down and together with it a large collection of living creatures is lost.

The rebuilding process starts immediately, targeting reopening before the Sydney Olympics. Since then, new exhibits were added, such as the Lost World of Reptiles and the Spider World.

What is to see:

How to get there
By private car, use Sydney - Newcastle freeway, take the Gosford exit and follow the signs. See map.
By train, from Central Station to Gosford and from there with a taxi. Get a receipt from the taxi and you receive a discount on the admission fee. See the Australian Reptile Park web site.