You are here: Sydney A to Z (home) » Sydney Chinatown

The Chinese people started to migrate in Australia after fields of gold were discovered in Australia (NSW and Victoria). 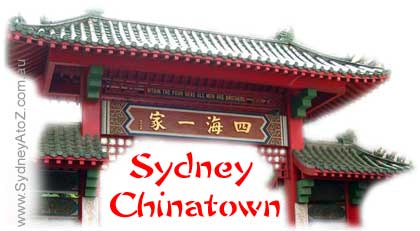 
In Sydney, the first records about Chinatown date from 1860's. At that time, Chinatown was situated between Wentworth Avenue and Wexford Street (Surry Hills). After the Lambing Flat Riot¹), the resentment against the Chinese population was growing and in 1861 Chinese Immigration Act was passed. This legislation was discriminating against the immigration of the Chinese people. Latter on, in 1901 Australian White Policy, legislation was passed restricting "Asiatic and coloureds" from migrating into Australia.

After 1966, when the Australian White Policy migration was abolished, the number of people of Chinese origin started to increase steadily. In Chinatown, through private investment, a lot of traditional Chinese icons started to be build: ceremonial archways, dragons, lions, pavilions and so on.


¹) Between 1860 and 1861, a wave of anti-Chinese riots took place in the gold fields of New South Wales, Australia. They entered in history as the riots from Lambing Flat (now called Young) after the name of the settlement.

In Sydney Chinatown you can find a variety of stores and attractions, cheap eateries and Chinese restaurants.

Do not forget the boutique fashion stores, jewelry stores and the grocery shopping stores which are selling traditional Chinese vegetables and fruits not normally available in other shops.

How to get there
By train to Central Station and then a 10 minute walk. All the buses going toward the Central Station via George Street. Monorail and the LightRail are also stopping in the area. See map.

Hours of Operation:
Most Chinese shops, in Chinatown or in an other suburb, are opened as any other shop, but some Chinese shops are also opened during Easter, Christmas or around New Year, because the Chinese are not observing these events. See the NSW public holidays list.